7 elements to an effective news release

Home/Blogging/7 elements to an effective news release
Previous Next

7 elements to an effective news release

Yet, despite industry changes, the most effective way for businesses and organizations to generate awareness is by distributing news releases. Americans are still consuming news at a very high rate, according to Pew Research Center. In fact, Nielsen reports that adults now are spending more than half of their day consuming media. 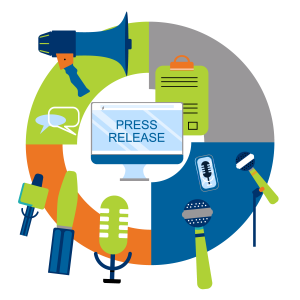 All three media formats – print, television and radio – have digital audiences that are growing exponentially.

Priority Marketing provides public relations services to clients across many industries, as well as nonprofits. Our Public Relations Team has prior experience in the newspaper, magazine, radio and television industries. Each day, our writers draft and distribute news releases across Florida and beyond. Those news releases are announcing new products, services, job hires, events, campaigns, awards, grants and other developments.

Below are seven elements our PR team is using to produce effective news releases:

News releases are no longer mailed or faxed to newsrooms. They are emailed. However, news reporters, editors and producers receive hundreds of emails each day. To capture their attention, you need a strong subject line, which should also be the headline. The subject line should entice members of the media to open the email and learn more.

Tip: Keep it short. Most email users decide in a second or two whether to delete or open a message. Email services like Outlook and Gmail often truncate subject lines to fit in a limited space. Aim for five to 10 words, no more.

Be factual, not fluffy

The first three letters of the word “news” are important to media – new. Therefore, the purpose of a news release is to announce something new. These are the five most common types of news releases that attract media attention: upcoming events, product launches, new services, staff announcements and company achievements. Be factual and straightforward. News releases must inform, not persuade.

Tip: Consider a guest article or op-ed if you want to be persuasive or include an opinion. Media strive for balance but offer opportunities to express opinions in a clearly labeled section. Be wary of crossing the editorial-advertising line.

Be clear and concise

English instructors preach the five Ws: who, what, when, where and why. The same basic elements should be included in a news release. Imagine the five Ws as bullet points. Providing answers to those five questions should give readers all of the information they need to know.

Tip: News releases should be structured using an inverted pyramid. Stack the release with as many facts as possible in the first two or three paragraphs. When editors trim news releases, they often cut from the bottom.

Including a compelling quote

As mentioned above, news releases should be factual and straight to the point. However, incorporating a quotation into the copy can inject a little personality and individuality. Quotes from a CEO, board member or manager can explain why readers should care about the announcement.

Tip: Make sure a quote sounds like someone would speak. Interview an individual to capture a natural response. Editors often remove quotes that sound like corporate speak or contain unrecognizable acronyms.

Nearly all reputable newspapers and magazines around the country adhere to writing and editing guidelines in the Associated Press Stylebook. The AP Stylebook attempts to standardize punctuation, grammar and word usage for journalists. Following AP Style allows media to simply cut-and-paste a news release with minimal editing. That’s incredibly important for time-strapped editors who might discard releases requiring significant amounts of editing.

Tip: The AP Stylebook is 619 pages and contains thousands of entries. Have a professional writer draft news releases because he or she likely memorized AP Style. For example, AP Style dictates the numbers one through nine must be spelled out, while numerals should be used for numbers 10 and greater. Only a professional writer would know that.

Imagine a news release like a resume. Typos aren’t just a turnoff; they could land a document in the circular file. Carefully proof a news release to ensure every word and every sentence is written to perfection. News releases are just important as a tidy storefront or clean website in making a good impression.

Tip: Ask a respected colleague to proof a news release. Read the copy with a mindset of being a new customer or member who knows little about the business or organization. Did you explain things in layman’s terms? Are the five Ws clearly stated?

A picture is worth a thousand words. Images help draw readers into a story. That’s why newspaper and magazine pages always include photographs. The better the image, the better your chance of having a news release published. Powerful images tell your story and result in better story placement. Television stations and digital media often incorporate submitted video into their reports.

Tip: Only send high-resolution photos. For a simple headshot, an image should be 1MB or higher. For other photos, the minimum file size is around 2MB. Generally, cell phones can provide image quality suitable for newspapers. However, most magazines, especially glossies, need extremely high-res images from professional cameras. Otherwise, images will appear blurry.

Do you need professional writers to help tell your story? Call Priority Marketing today at 239-267-2638 or email info@PriorityMarketing.com.

Case study: measuring results of a successful PR campaign
Public relations… a powerful piece to the marketing mix
Six tips for getting your articles published in newspapers, magazines
Position yourself as an expert source in the news media