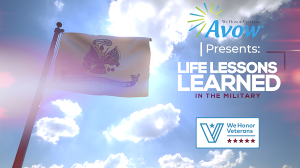 A documentary film, “Avow Presents: Life Lessons Learned in the Military,” which was shown at the Naples International Film Festival, has won two prestigious silver Telly Awards for non-broadcast history and non-broadcast documentary categories, as well as an Award of Distinction in the 27th Annual Communicator Awards.

Avow’s Director of Communications Reneé Stoll and Graphic Artist Joel Collazo produced, filmed, wrote and edited the film over a year to highlight the stories of 17 men and women from the armed forces serving from WWII to Desert Storm, including Avow’s own Director of Education and registered nurse Tina Gosling. The more than hour-long, copyrighted documentary filmed on the Avow campus was completed in 2021 and features other well-known local veterans with amazing stories. The documentary is dedicated to Charles D. Harman, first lieutenant in the U.S. Army, who was featured in the film but passed away before it was completed.

“Joel and I spent hours with these veterans, listening to amazing stories from their time in service,” Stoll said. “The sacrifices they made changed them for the entirety of their lives. At Avow, we strive to connect, listen and understand our veteran patients and their unique experiences at the end of life. This movie is one way we show our dedication to those who served and hope our patients find comradery with the faces they see on screen, including Avow Founder Bruce Hayhoe.”

Avow is a Level 5 Partner with We Honor Veterans, a program of the National Hospice and Palliative Care Organization (NHPCO) and is among 3.8% of hospices participating in the program to achieve the highest level, demonstrating commitment to veteran-centric care.

In addition to offering celebrations throughout each year to honor veterans, Avow provides specialized care to veterans who are facing a terminal illness, including a veteran-to-veteran volunteer program, training on conflict-specific medical and mental health concerns and knowledge to assist veterans navigating VA benefits.

NHPCO and the Department of Veterans Affairs launched We Honor Veterans in 2010 to address the growing need for veteran-centered care, especially as veterans from different eras are aging and need access to veteran-centric palliative and hospice care. Learn more about the We Honor Veterans program at WeHonorVeterans.org and to watch the film, visit Avow’s YouTube channel.

Founded in 1979, the Telly Awards is a premier global competition honoring excellence in local, regional and cable television commercials, as well as non-broadcast video and television programming. Winners represent some of the most respected advertising agencies, television stations, production companies and publishers around the world.

The Communicator Awards, presented by the Academy of Interactive & Visual Arts, are dedicated to recognizing excellence, effectiveness and innovation across all areas of communication. Founded nearly three decades ago, The Communicator Awards recognizes excellence in all areas of communication and receives almost 5,000 entries from companies, agencies, studios and boutique shops of all sizes, making it, globally, one of the largest awards shows of its kind.