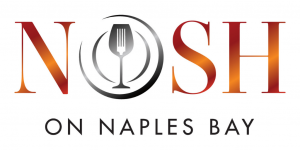 Devotees of chef Todd Johnson, who have followed his extensive food and restaurant creations throughout Southwest Florida for the past 30 years, can find his latest culinary endeavor on the waterfront at his new restaurant, Nosh on Naples Bay.

Johnson and his wife and business partner, Dana, are currently renovating existing space at Naples Bay Resort to create an upscale, modern vibe at 1500 5th Ave., with the goal of opening in January 2022.

“Guests can expect an ‘experience’ as they enjoy chef-driven, global cuisine featuring large, shareable plates,” said Johnson. “I plan to source the very finest ingredients and flavors, locally as well as globally, flying in Wagyu from Japan or Australia or working with local purveyors on sourcing the very best local seafood or home-grown vegetables. Our menu will change frequently.”

A certified sommelier, Johnson will also offer a robust wine list as well as a full bar and craft cocktail menu. The 150-seat restaurant will offer indoor and outdoor waterfront dining, private event space for 32 guests and on-site catering to serve the Naples Bay Resort community.

Johnson is excited that the open-kitchen concept will allow him to see and interact with guests.

“I’ll be able to engage with our guests and the many awesome friends we’ve made over the years and that’s important to me as a chef and member of the community,” said Johnson. “The venue is just small enough that I can put my personal touch on every dish. And while our menu will offer refined food in an upscale environment, it’s still very approachable and friendly for locals as well as visitors to Southwest Florida.”

The Naples High School graduate has lived in Naples since he was 10. He worked at many area restaurants before graduating from Johnson & Wales University in Miami in 1994. From there, Johnson returned home to Naples and became the executive sous chef at Chef’s Garden, now Ridgeway. After several opportunities around the U.S., including working alongside Chef Tom Colicchio, co-founder of the Gramercy Tavern in New York City, Johnson moved back to Southwest Florida to open Bistro 41 in Fort Myers, then Aqua Grill in Naples. Most recently, Johnson was executive chef and co-owner of Rumrunners in Cape Coral, where he led culinary operations for more than 18 years.

Johnson, who has served as a celebrity chef for some of the area’s top charities, including the Southwest Florida Wine & Food Fest, also plans to host private wine dinners and local charitable events.