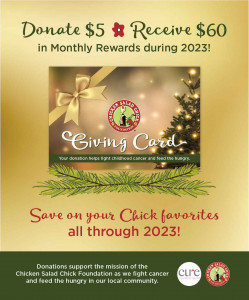 For local franchise owners Kendal Potesta and Scott Pace who have been donating meals to first responders and healthcare workers following Hurricane Ian, the Giving Card initiative is another great way to support those in need this holiday season.

“When we learned about the impact of Community Cooperative through their soup kitchen, Meals on Wheels and mobile food pantries, we knew they were the right partner for our Giving Card initiative,” said Kendal Potesta, co-owner of Chicken Salad Chick of Southwest Florida. “Since opening in September, we have quickly experienced the generosity of this community and our customers, and I feel confident that our Giving Card program will be well received and will help feed many families this holiday season and beyond.”

The Chicken Salad Chick Foundation was created in 2014 by company co-founders Kevin and Stacy Brown following Kevin’s cancer diagnosis. True to Chicken Salad Chick’s mission of spreading joy, enriching lives, and serving others, the Browns knew the restaurant would provide an opportunity to make a positive impact in the lives of friends and neighbors in need. Today, the CSC Foundation focuses on two initiatives: feeding the hungry and fighting cancer.

For more information about the Giving Card, visit chickensaladchick.com/our-food/giving-card/.

Chicken Salad Chick serves full-flavored, Southern-style chicken salad made from scratch and served from the heart. With more than a dozen original chicken salad flavors as well as fresh side salads, gourmet soups, signature sandwiches and delicious desserts, Chicken Salad Chick’s robust menu is a perfect fit for any guest. Founded in Auburn, Alabama by Stacy and Kevin Brown, in 2008, Chicken Salad Chick has grown to more than 215 restaurants in 17 states. Today, under the leadership of Scott Deviney and the Chicken Salad Chick team, the brand is continuing its rapid expansion with both franchise and company locations. Chicken Salad Chick has received numerous accolades including rankings in the 2022 Entrepreneur Franchise 500, Franchise Times’ Fast & Serious for the second consecutive year, Fast Casual.com‘s top Movers and Shakers from 2018 to 2022, QSR’s Best Franchise Deals in 2019 and 2020, and Franchise Business Review’s Top Food Franchises in 2020. See www.chickensaladchick.com for additional information.