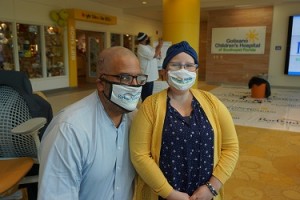 Throughout September, child advocates and supporters of Barbara’s Friends “braved the shave,” allowing local childhood cancer survivors to shave their heads to raise awareness and support for Barbara’s Friends – the cancer fund for Golisano Children’s Hospital of Southwest Florida. In all, $170,000 was raised during the event that this year went virtual.

In addition to raising money for the 25th year of Barbara’s Friends, Clips for Cancer raises awareness about the challenges of childhood cancer, including going bald, a frequent side-effect of cancer treatments. Proceeds provide equipment, staffing and services to support lifesaving cancer care for children in our region at Golisano Children’s Hospital, one of nine centers in the state to offer a complete pediatric hematology/oncology program.

The final event of the month-long series featured cancer survivor Mackenzie Hummer shaving the head of Armando Llechu, chief officer, hospital operations and women’s and children’s services at Lee Health. Clips for Cancer was created in 2018 after Llechu met Hummer and was inspired by her bravery and positive spirit. Twelve years ago, on January 29, 2008, then 8-year-old Mackenzie was diagnosed with an aggressive, cancerous brain tumor called medulloblastoma. Thirty surgeries, 30 radiation treatments, 10 months of chemotherapy and numerous hospital stays would follow.

“What most people don’t realize is that sometimes, not often, the hair doesn’t grow back and for Mackenzie that’s the case,” said Mackenzie’s mom, Carrie Hummer. “For Mackenzie, she hasn’t had hair since she was 8 years old. The type of radiation and amount of radiation she had and some of the late effects of treatment killed most of her hair follicles. She barely remembers what it is like to have hair. So, for her, this is very empowering and it means a lot that these adults volunteered to lose their hair, for her and kids like her, when they didn’t have too.”

Currently, Mackenzie is battling late-effect complications as a result of the treatments she received to save her life. She is a strong young hero who continues to defy the odds every day. Llechu was joined by Dr. Venkat Prasad, chief medical officer population health and physician services, and Sarai Hernandez-Salinas, pediatric cancer survivor for the final day of shaving.

“I am humbled by how this event has grown. It was my vision three years ago to connect in a real way with our childhood cancer patients and meet them where they are in that experience of losing their hair,” Llechu said.  “These families and their children are the heroes, and Clips for Cancer is about them. It’s incredible to see their smiles and honor their journey in a way the community has truly embraced.”

Contributors who helped in the success of Clips for Cancer include Great Clips, the salon sponsor who provided space for live shaving events every Friday and encouraged customer donations. Eleven salons took part this year with franchisees Jack Leaf, Jeffery Scholl and Jennifer Small sharing their salons for the event.

“We knew when we participated last year that Clips for Cancer was truly special,” said Jeffrey Scholl, Great Clips salon owner and franchisee. “Given the challenges of COVID-19, our Great Clips salons wanted to make sure we could still help. The result has been even better than we imagined. We are proud to be part of an event that brings awareness to the issue of pediatric cancer.”

Other business support included Promotional Incentives for donating custom masks for participants and survivors; and Dunkin’ providing coffee and donuts for every shaving event. Also in September, all Southwest Florida 3 Pepper Burrito Co., locations donated proceeds from kids’ meals to Barbara’s Friends. Pure Barre Fort Myers and Gateway hosted special donation-only classes to raise $2,500 for Barbara’s Friends during September Childhood Cancer Awareness month. Grants that contributed to the success of Clips for Cancer were $25,000 from The John E. & Aliese Price Foundation, Inc.; $42,000 from Florida Radiology Consultants and Dr. Tom Presbrey; $20,000 from Nancy and Randy Howell (daughter and son-in-law of Barbara’s Friends founders Frank and Betty Haskell); $10,000 from Joe Catti and FineMark National Bank & Trust, and $5,000 from The Wasie Foundation.

“For me it’s about watching the other kids and seeing them get a chance to be involved and shine,” said Hummer, now 21 years old. “I was 19 when Clips started and while I was the initial inspiration behind this event, my story is just the beginning. It’s about all the kids, like me, who have and are battling cancer. I love seeing the little kids get so excited to hold the clippers and shave. For me it’s about all of us and sharing our stories.”

Learn more about Barbara’s Friends and how you can help Southwest Florida children battling cancer at BarbarasFriends.org.

Established in 1995, Barbara’s Friends provides equipment, staffing and services to support lifesaving cancer care for children from across southwest Florida at Golisano Children’s Hospital. The Pediatric Hematology/Oncology Program is the only program of its kind in Southwest Florida and has served over 10,000 patients since opening. No child is denied treatment or turned away as a result of their family’s inability to pay for care. For more information about the Barbara’s Friends fund and supporting child patients in your community, please call Lee Health Foundation at (239) 343-6950 or visit BarbarasFriends.org.

Established in 1994, Golisano Children’s Hospital of Southwest Florida has been named a “Top Hospital” by The Leapfrog Group for the past three years. It is the only recognized children’s hospital between Tampa and Miami. Lee Health opened the new 134-bed Golisano Children’s Hospital in May 2017, relocating the children’s hospital from the adjacent HealthPark Medical Center. It includes comprehensive pediatric services including a 24-hour pediatric emergency department, hematology-oncology unit, milk lab, Regional Perinatal Intensive Care Center, and Level II and Level III NICU with 70 private rooms. Golisano Children’s Hospital is proud to have been named Soliant’s 2019 Most Beautiful Hospital in the U.S., a recognition determined by popular vote. For more information, visit GolisanoChildrensSWFL.org.