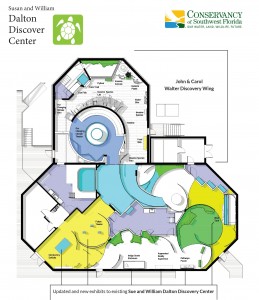 The Conservancy of Southwest Florida has announced a monumental $4.5 million renovation and expansion of its Susan and William Dalton Discovery Center, which will add new interactive exhibits and galleries exploring areas of critical importance to the region.

The Dalton Discovery Center, which opened in 2012, is an interactive learning center featuring live animals and exhibits that showcase Southwest Florida’s diverse ecosystems.

“Sue Dalton has inspired and enabled us to dramatically expand the Dalton Discovery Center with a second leadership commitment, and she is being joined by other generous benefactors, including John and Carol Walter, in helping to bring this dream to life,” said Conservancy President and CEO Rob Moher. “As part of the Conservancy’s Vision 2025 roadmap addressing key priorities facing Southwest Florida’s land, water, wildlife and future, we are enhancing our Nature Center and guest experience with new exhibits and activities that will further the educational mission of the Conservancy of Southwest Florida.”

The Dalton Discovery Center renovations and expansion include exciting new enhancements such as an Augmented Reality Endangered Species exhibit that will allow guests to interact digitally with Florida’s threatened animals.

“Thousands of visitors, including many school groups, have learned about the region’s ecosystem and environment by touring the Discovery Center, and I’m pleased to support the comprehensive renovations and expansion that will further educate and engage Conservancy members and guests,” said Sue Dalton, donor and namesake of the Dalton Discovery Center.

“We are honored to provide this new Discovery Wing featuring an immersive, educational experience that will offer guests an in-depth look at how climate change and invasive species are impacting the Everglades and everyone’s quality of life,” John and Carol Walter shared. “We hope all visitors will gain new perspectives and be inspired to take action.”

To accommodate the ambitious construction timeline, the Conservancy Nature Center will close to the public until the project’s estimated completion in early 2021.

The new Invasive Species Gallery in the Walter Discovery Wing will explore Burmese pythons, the new apex predator in the Florida Everglades and a focus of the Conservancy’s nationally recognized Burmese python research and removal efforts. The gallery also will examine lionfish, cane toads and invasive plants.

“An integral component of the Conservancy’s python research and removal program is educational outreach, and this exhibit will help to showcase the true scale of the invasive animal problem in Southwest Florida,” said Ian Bartoszek, the Conservancy’s environmental science project manager.

The Climate Change Gallery, also located in the Walter Discovery Wing, will focus on intensification of storms, ocean acidification and habitat protection. The centerpiece will be a spherical digital display system that introduces visitors to the impacts of climate change locally and around the world. The “Science on a Sphere” system was developed by the federal government through the National Oceanographic and Atmospheric Administration (NOAA) and has been deployed around the world with partner organizations.

“Southwest Florida is an epicenter for the impacts of climate change, like sea level rise and increased extreme weather,” said Heather Skaza Acosta, director of environmental education at the Conservancy. “The Walter Discovery Wing Climate Change Gallery will connect our visitors to these impacts in ways that inspire them to personal and community action to protect our communities in Southwest Florida.”

Through a generous grant from the Big Cypress Basin of the South Florida Water Management District, the Conservancy also plans to alter the property’s current wet detention and filter marsh design to increase the water treatment area by 62.7%. This will allow additional water storage on site and subsequent treatment of stormwater runoff while allowing for improved water quality before discharging into the Gordon River, which ultimately connects with Naples Bay. The filter marsh project will add more native aquatic habitat for wildlife as well as a continued educational value to the public.

The Conservancy’s research team will collect monthly water quality samples once construction is complete to analyze water for basic nutrient and physical parameters.

While the Nature Center is closed, the Conservancy continues to conduct field research and advocate for environmental causes and policies that further its mission of protecting the region’s water, land, wildlife and future.

Additionally, the Conservancy will continue to admit and treat injured, sick and orphaned animals at the von Arx Wildlife Hospital. Anyone who finds an injured animal is asked to call 239-262-CARE (2273).

During the renovation closure, Conservancy Nature Center members can enjoy kayaking at a 50% discount on Thursdays through Saturdays by calling 239-213-2500 to make a reservation 24 hours in advance. Additionally, the Conservancy will host its Summer Virtual “Evenings” Series, which begins July 28 and features retired Senior Biologist Dave Addison highlighting the Conservancy’s sea turtle monitoring program. Additional exclusive member benefits during the Nature Center closure will be announced soon.

The Conservancy initially closed to the public in late March based on guidelines to control the spread of COVID-19. Soon after, the Conservancy launched virtual learning opportunities to connect audiences of all ages with information and resources about the region’s wildlife and coastal habitat. The comprehensive virtual curriculum includes lesson plans, hands-on activities, educational videos, scavenger hunts and links to other valuable resources, and is available online at Conservancy.org/Virtual-Learning.