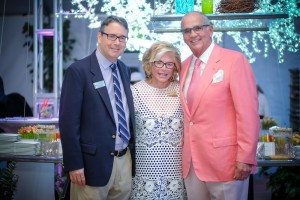 New for this year, Magic Under the Mangroves is debuting its Conservancy Exclusives, unique auction lots featuring one-of-a-kind experiences and tours not available to the general public. This list includes:

Auction getaways include a guided culinary adventure in Cuba; a luxury vacation to a private villa retreat in Jamaica; an art, museum, newsroom and culinary tour in Washington, D.C.; a golfing and nature trip to North Carolina; and a two-night stay and swamp walk in the Everglades with famed wildlife photographer Clyde Butcher.

“We’ve been overwhelmed by the generosity of our loyal supporters, business partners and employees who have offered to donate their resources, expertise and time to the Conservancy,” said Rob Moher, president and CEO of the Conservancy. “Magic Under the Mangroves is our largest fundraising event and plays a huge role in advancing the Conservancy’s mission to protect the region’s water, land, wildlife and future.”

Since its inception, Magic Under the Mangroves has raised more than $9.3 million.

For more information about Magic Under the Mangroves, please call 239-403-4218 or visit www.conservancy.org/events/magic-under-the-mangroves.