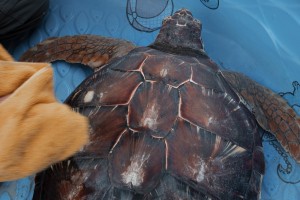 The Conservancy of Southwest Florida released its loggerhead sea turtle ambassador, NIN, into the Gulf of Mexico as it continues groundbreaking research into the endangered species.

NIN was incubated at a low temperature and low humidity levels, and tests later confirmed it was a male. He arrived at the Conservancy in May 2018 as a juvenile weighing about 14 ounces with a straight-line carapace (top shell) of 5.2 inches. At his release on March 25, NIN weighed 51 pounds and his shell measured 21.1 inches.

As the first known male sea turtle ambassador at the Conservancy, NIN took temporary residence in the Conservancy’s 5,000-gallon Patch Reef Aquarium at the Dalton Discovery Center. Before entering the Gulf of Mexico near Ten Thousand Islands, NIN was fitted with a satellite transmitter on his carapace to track his movements and migrations, allowing researchers to understand more about this species, especially at the juvenile stage.

“Our long-term studies have identified the Ten Thousand Islands as an important area for marine turtles, providing the food and habitat that NIN will need to survive in the wild,” said Jeff Schmid, the Conservancy’s science research manager. “The satellite transmitter will allow us to remotely observe NIN’s behavior after release and assess how he is acclimating to his new home.”

The satellite transmitter also will allow the Conservancy to monitor NIN’s feeding behavior and local movements to see if they are similar to those of wild turtles.

Loggerheads are primarily molluscivores that use their strong jaws and muscles in their relatively large heads to crush conchs, whelks and other hard-shelled creatures like crabs.

The Conservancy debuted its sea turtle monitoring and protection program in 1982, and researchers have documented more than 285,000 hatchlings of primarily loggerhead sea turtles. Only 1 in 1,000 sea turtles survives to adulthood, so each individual that can be protected is significant to the survival of this threatened species.

The Conservancy protects sea turtle nests through numerous ways, including:

In Florida, loggerheads are a threatened species. As hatchlings, sea turtles face several natural predators, but as adults their only predators are sharks and humans. Human threats include habitat loss, poaching, pollution, litter (such as plastic bags), commercial fishing and boat collisions.

The Conservancy offers guidelines for residents and visitors to help the sea turtle population:

The Conservancy’s sea turtle ambassador was named by Barbara Chur, a Conservancy supporter who bid on naming rights at the 2018 Magic Under the Mangroves gala. NIN stands for “Nine In Naples,” a group of nine women who bonded during a visit to Southwest Florida.