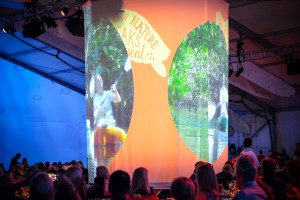 Conservancy of Southwest Florida was recognized by the Florida Public Relations Association (FPRA) Southwest Florida Chapter with awards for the execution of a 3-minute Fund-A-Need video for its 2018 Magic Under the Mangroves event, which educated attendees about the Conservancy’s dynamic internship program and the need for philanthropic support.

The Conservancy of Southwest Florida is the region’s largest nonprofit dedicated to protecting Southwest Florida’s water, land, wildlife and future. For the past 15 years, the Conservancy has hosted its annual signature fundraiser, Magic Under the Mangroves, to raise support for operations and programs. The event features live auction lots including a Fund-A-Need lot, which for the 2018 event benefited the Conservancy’s internship program. Each year the Conservancy receives more than 300 applications for approximately 26 internship positions. Interns support all areas of the Conservancy including the wildlife rehabilitation in the von Arx Wildlife Hospital, sea turtle research, educational outreach, advocacy efforts and much more.

In order to create a compelling case for support during the event, Priority Marketing was engaged to create a 3-minute video to be played during the Live Auction of the Magic gala. The project included screening and interviewing interns, videotaping daily activities of the interns in their current workplaces, creating the script and editing. Before the video began playing at the Magic gala, an additional effect was created with the help of Harmon’s Audio Visual, leveraging its audio, visual and staging expertise to choreograph the drop of a circular curtain onstage, which revealed current Conservancy interns who then walked through the crowd before the video played and bidding began.

The video met and exceeded its objectives, inspiring a record-breaking $1,529,000 in donations for the 2018 Fund-A-Need and helping the 14th annual Magic Under the Mangroves gala and auction raise a record $1.9 million. The Fund-A-Need video alone generated three bids of $250,000, which is the cost to endow an intern position.

FPRA Image Award winners are selected by a panel of industry professionals from outside of Southwest Florida who evaluate entries based on several criteria including a situational analysis, objectives, implementation, results and budget. The FPRA Southwest Chapter’s Image Awards is an annual competition that recognizes measurable excellence among Southwest Florida public relations professionals.