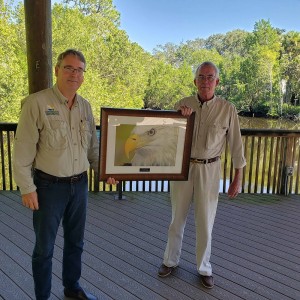 The Conservancy of Southwest Florida has bestowed its highest honor, the Eagle Award, on retiring U.S. Rep. Francis Rooney. The award will be conveyed at the Conservancy’s Annual Meeting for members on Jan. 19 at 6 p.m. to be held virtually.

“Congressman Rooney has been highly accessible to our staff and has worked to advance critical conservation priorities in our region consistently for the past four years,” said Rob Moher, president and CEO of the Conservancy of Southwest Florida. “Through unanimous consent of the staff, nominating committee and full Board of Directors, we selected Congressman Rooney in recognition of his effective federal representation in our region, the strongest in decades.”

The Conservancy’s Eagle Award is the highest award presented to the individual or group whose work and actions protect the natural environment and quality of life in Southwest Florida. Past recipients have made their contributions in many ways, including philanthropy, grassroots activism, art and conservation leadership.

In the 115th Congress, Rooney served as Vice-Chair of the Foreign Affairs Committee and a member of the Joint Economic Committee. In the 116th Congress, Rooney served as ranking member of the Western Hemisphere subcommittee of the Foreign Affairs Committee. He is the Republican co-chair of the Climate Solutions Caucus and a member of the bi-partisan Everglades and Estuary caucuses, which focus on restoring Florida’s ecosystems. Rooney’s top congressional priorities included extending the moratorium on offshore drilling in the Eastern Gulf of Mexico and fully funding the projects contained in the Comprehensive Everglades Restoration Plan (CERP) to protect and restore the Lake Okeechobee watershed.

Board Chair, Van Williams, added: “Congressman Rooney has set a high bar for others to follow when it comes to the pursuit of conservation priorities that benefit not only our environment, but all the residents of Southwest Florida. We are pleased to be able to recognize his dedication and commitment to protecting our water quality, our Everglades and our quality of life.”