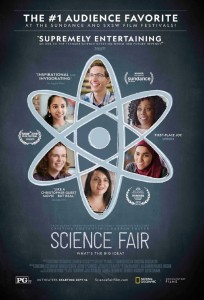 The Conservancy of Southwest Florida is offering free admission on Saturday, Dec. 15, when the center will offer two screenings of the new movie “Science Fair.”

Produced by National Geographic Documentary Films, “Science Fair” follows nine high school students as they prepare to compete against 1,700 teenagers from 78 countries at the International Science and Engineering Fair. The movie, which chronicles the students’ victories, defeats and hopes to change the world through science, was named the audience favorite at both the Sundance and SXSW film festivals. “Science Fair” is being screened in select cities across the country.

“The documentary will serve as an inspiration to Southwest Florida students who are participating in science fairs over the next few months,” said Heather Skaza-Acosta, the Conservancy’s director of environmental education. “We’re hoping the film generates more excitement for the field of science, and our team at the Conservancy will be available after the movie to answer any questions.”

The movie is geared toward children in later grades of elementary school, middle school and high school.

The Conservancy holds Free Admission Days on select dates throughout the year to showcase special wildlife exhibits, programs, displays and educational talks from environmentalists and biologists. The regular admission price is $14.95 for adults and $9.95 for children.