Conservancy of Southwest Florida raises $1.4 million during Magic Under the Mangroves virtual gala, ‘The Magic Hour’

Conservancy of Southwest Florida raises $1.4 million during Magic Under the Mangroves virtual gala, ‘The Magic Hour’ 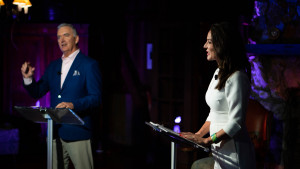 The Conservancy of Southwest Florida’s annual fundraising event, Magic Under the Mangroves, brought in $1.4 million to support the Conservancy’s longstanding mission of protecting the water, land, wildlife and future in Southwest Florida. This year’s event, themed “The Magic Hour,” was chaired by Katrina Lundmark-Kash with Carol Walter serving as vice-chair.

Held virtually this year due to the pandemic, the event was livestreamed from Keewaydin Island where the Conservancy first started in 1964 when a new road was planned to run right through the heart of Rookery Bay. Those who understood the importance of Rookery Bay knew it was time to take action. Several local citizens immediately began to work together to fight what they dubbed “The Road to Nowhere.” It was here on Lester Norris’ porch at the Keewaydin Club, they planned their strategy.

And on March 4, 2021, that’s where Conservancy President and CEO Rob Moher kicked off the “The Magic Hour” event. Inside the Keewaydin Lodge, auctioneer Scott Robertson and co-host Rachel Pierce rallied competitive bidding throughout the live auction with packages ranging from culinary experiences to remote getaways to custom jewelry. Additionally, the event featured a live Fund-A-Need that raised $592,000 to support the mission-critical work of the Conservancy including science, environmental education, wildlife rehabilitation, advocacy and policy.

“While it’s been a year like no other, once again, our supporters came through for us in an especially meaningful and significant way,” said Rob Moher, president and CEO, Conservancy of Southwest Florida. “On behalf of our staff, volunteers and board of directors, we are truly honored and grateful for the continued support. The commitment and generosity we experienced further empowers and inspires us to continue to tirelessly protect our natural environment and outdoor resources for the well-being of everyone, now, and forever.”

Named one of the top charitable events in Naples, Magic Under the Mangroves helps move the Conservancy’s mission forward year after year. Since its inception 17 years ago, Magic has raised nearly $15 million. All funds are used to support local environmental causes.