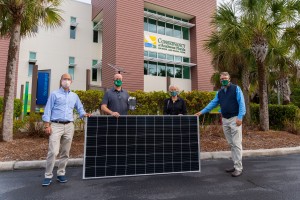 The Conservancy of Southwest Florida has received a generous donation from The Martin Foundation that will dramatically expand solar power to its Naples-based campus, further enhancing the Conservancy’s commitment to sustainability and addressing the impact of climate change on the environment.

“The Martin Foundation is thrilled to be a part of solarizing the campus of the Conservancy of Southwest Florida,” said Lisa Martin, director, The Martin Foundation. “What better place than in the ‘Sunshine State’ to take advantage of the abundant and free solar energy and use it to reduce electricity expenses, reduce dependence on fossil fuels and reduce CO2 emissions.”

A total of 537 solar panels will be installed on the roofs of four campus buildings, which in 40 years could result in a cumulative energy savings of $1 million, allowing these dollars to be invested into direct program work of the Conservancy. Savings estimates equate to 21,394 barrels of oil saved, 235, 887 trees planted and 1,917 vehicles off the road. Forty existing panels on the von Arx Wildlife Hospital will be moved to another building to make room for more panels.

“Having an extensive capacity to generate electricity on the campus aligns with our environmental goals to use the best sustainable practices as well as to educate our members and the public about the benefits of solar energy,” said Rob Moher, president and CEO of the Conservancy of Southwest Florida. “We are grateful to The Martin Foundation for their generous donation that further expands our commitment to sustainability and reducing our carbon footprint.”

The panels and system will be installed during the current renovations already taken place at the Conservancy Nature Center. These include the expansion of the Susan and William Dalton Discovery Center, including the addition of the new John & Carol Walter Discovery Wing, along with an expansion of on site water quality treatment filter marshes. Plans are also underway for the construction of a new Environmental Studies Dormitory to support the Conservancy’s longstanding internship program, which when completed will also feature a full solar array on the building as part of this grant.

Six of the buildings on the Conservancy’s 21-acre campus have been LEED certified through the United States Green Building Council. LEED, short for Leadership in Energy and Environmental Design is the nationally accepted benchmark for the design, construction and operation of high-performance green buildings. The von Arx Wildlife Hospital was the first building in Collier County and the first wildlife hospital in the state to receive the LEED Platinum certification.