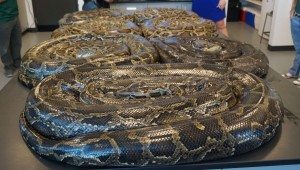 More than four years of research is yielding remarkable results in the study and management of the invasive Burmese python in Southwest Florida. Over the course of four breeding seasons, the Conservancy of Southwest Florida’s wildlife biologists have removed more than 6,500 pounds of python and more than 3,000 developing python eggs from the local ecosystem. This collaborative and proactive effort is dedicated to managing the population of an invasive apex predator in Collier County Florida.

During a necropsy of a 17-foot, 152-pound female on Thursday, April 13, Conservancy wildlife biologists documented at least 95 developing eggs.

“Our research focus has evolved to target female pythons and disrupt the breeding season activity in a localized area of Southwest Florida,” said Ian Bartoszek, wildlife biologist and science coordinator for the Conservancy of Southwest Florida. “Through hunting and tracking efforts we have a technique that seems to be working while we wait for an even more effective weapon to be developed. These efforts enable our team to learn more about the behavior and movement of pythons, deter the growth of this population, and to positively impact our surrounding ecosystem.”

“We follow the science,” said Conservancy of Southwest Florida President and CEO Rob Moher. “If we can remove python eggs from the equation the results are two-fold. We are keeping the snakes from multiplying and reducing the overall impact on our native wildlife population.” 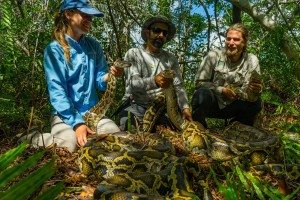 Some research shows that the Burmese python is responsible for a 90 percent decline in small mammal populations within the Everglades.

“After four years of studying these cryptic animals, we feel the best way to locate a female python during the breeding season is by tracking a male python. We’ve turned the pythons against themselves.” said Bartoszek.

Biologists are accumulating valuable life history information on the behavior of Burmese pythons in Southwest Florida. This information is leading to the development of an effective management technique that combines both hunting and radio-telemetry tracking tools to target and remove breeding female pythons and disrupt the egg-laying cycle. 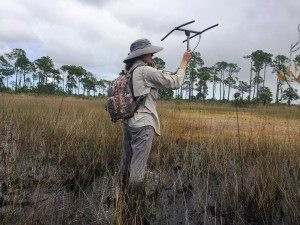 A total of 20 adult pythons are currently under surveillance by radio tag, leading researchers to more pythons, and enabling the team to gain a better understanding of their movement patterns and control the growth of this invasive species. This year alone, one captured python named Jaeger has led researchers to three breeding females. The removed adult female pythons are humanely euthanized and the Conservancy of Southwest Florida’s wildlife biologists then perform a necropsy to examine the creature, log data and collect samples for further studies. 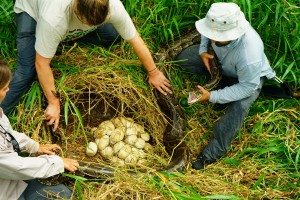 Since 2013, the Conservancy of Southwest Florida team has captured more than three tons of python from East Naples. Activities encompassed through the research team’s project includes foot and road surveys to better understand the range of pythons in Southwest Florida; outreach efforts to educate land owners and land managers about pythons; mailings and billboard postings to raise awareness and gain information; removal of pythons across Southwest Florida; necropsies of collected pythons to obtain information about diet and reproductive activity; tracking pythons through radio telemetry to learn ecological habits; using radio-tagged pythons to find untagged pythons; and construction and testing of trapping methods.

To report an invasive species sighting, the public is asked to call 800-Ive-Got-1 or IveGotOne.org. For more information, visit www.conservancy.org.

The Conservancy of Southwest Florida is a not-for-profit environmental protection organization with a 50 year history focused on the issues impacting the water, land wildlife and future of Collier, Lee, Charlotte, Hendry and Glades counties. The Conservancy accomplishes this mission through the combined efforts of its experts in the areas of environmental science, policy, education and wildlife rehabilitation. The Conservancy of Southwest Florida, world-class Nature Center and von Arx Wildlife Hospital are headquartered in Naples, Florida, 1495 Smith Preserve Way, south of the Naples Zoo off Goodlette-Frank Road. Learn more about the Conservancy’s work and how to support the quality of life in Southwest Florida www.conservancy.org.