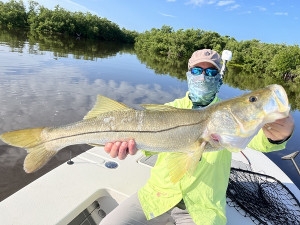 The Conservancy of Southwest Florida will hold its 29th annual RedSnook Catch and Release Charity Fishing Tournament Oct. 21-23 to benefit the Conservancy’s commitment to water quality protection, as well as preservation and enhancement of local fisheries.

“The RedSnook Catch and Release Charity Tournament is an absolute vital source of funding, engagement and involvement to help the Conservancy solve water quality problems in our region,” said Rob Moher, president and CEO of the Conservancy. “Through the years, the RedSnook tournament has brought more than $1.5 million that directly fund our water quality efforts both in advocacy locally and in Tallahassee and Washington, D.C., and also our scientific research and education programs, which help us understand the impacts of different nutrients on our water resources.”

“Our beaches and waters are a generational resource, so it’s really crucial to raise awareness of the fragility of that resource to ensure that future generations can continue to enjoy it,” said Jessica Fontana, tournament committee member.

Through the years, the funds raised at the RedSnook Catch and Release Charity Tournament have helped support the Conservancy’s water quality work in several ways, including:

“There are a lot of great, fun tournaments around, but this is one of the few that everyone should care about because it’s all about the water,” said Wayne Meland, tournament co-chair. “Whether you fish or not, to be involved with the RedSnook Tournament is important, because water is the key to why everyone loves living here.”

Team entry is $275 for one angler and $550 for two. Additional tickets to the Kick-Off Party are $75 per person and available until Oct. 1. For information, email amyt@conservancy.org, call 239-403-4200 or visit conservancy.org/events/redsnook/.