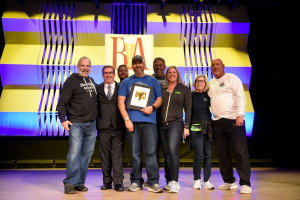 Fort Myers Brewing Company has earned international acclaim with a gold medal at the 2022 World Beer Cup, a global beer competition recognizing the most outstanding brewers and their beers.

The brewery was awarded gold in the Chocolate Beer category for its popular Chocolate Stout, an imperial stout that’s chock-full of sweetness and decadent layers of rich chocolate seamlessly melding with subtle wisps of roasted barley and espresso.

“For our Chocolate Stout to be named the best in the world in this prestigious competition is an incredible honor,” said Rob Whyte, who co-founded Fort Myers Brewing in 2013 with his wife, Jen. “Our brewing team is passionate about our work to perfect and fine-tune unique, flavorful craft brews for fellow beer-lovers to enjoy, so it means a lot for our stout to be selected by judges around the world for this top recognition.”

Regarded as “the Olympics of beer,” the World Beer Cup is the most prestigious beer competition in the world, presented biennially by the Brewers Association in conjunction with the Craft Brewers Conference and BrewExpo America, which was held this year on May 5 in Minnesota. The 2022 competition attracted 10,542 entries across 103 categories from breweries in 57 countries, and winners were selected by an international panel of 226 judges.

Established in 2013, Fort Myers Brewing Company was the first microbrewery to open in Lee County and continues to lead Southwest Florida’s surging craft beer movement. Founded by Rob and Jen Whyte, Fort Myers Brewing carries a signature line of flagship beers in addition to seasonal brews and small batch specialties. Its ales, pilsners, stouts, IPAs and hard seltzers are winners of multiple prestigious awards, including golds at the Best Florida Beer Competition, a silver at the 2018 World Beer Cup, a bronze at the 2019 Great American Beer Festival and Grand National Champion at the 2021 U.S. Open Hard Seltzer Championship. Fort Myers Brewing was named “Best Large Brewery in Florida” in 2016 and received the Business Resiliency and Innovation of the Year Award at the Lee County Economic Development Office, Horizon Council and Horizon Foundation’s 2021 Industry Appreciation Awards. Its beers are poured at 1,041 locations, including 620 bars and restaurants, and are available for purchase in 421 retail outlets, including grocery, package and convenience stores. The brewery is located at 12811 Commerce Lakes Drive, Suite 28, in Fort Myers. For more information, visit FMbrew.com or call 239-313-6576.