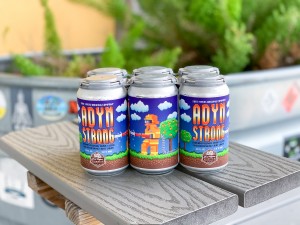 Fort Myers Brewing Company is introducing Adyn Strong, a new light and refreshing German Pilsner brewed for a special cause.

“Fort Myers Brewing fans likely remember our friend Adyn Pickett, the Cape Coral boy who is fighting leukemia,” said Jen Whyte, co-owner of Fort Myers Brewing Company. “Last year, we hosted a silent auction and fundraiser in our taproom that raised more than $15,500 for the Pickett family. Now, we are releasing a limited edition Adyn Strong 6-pack that will help this family with mounting medical bills.”

Adyn Pickett was first diagnosed with leukemia at age 4, then again at 6 years old and again at age 7. His intense treatments included multiple rounds of chemotherapy, transfusions, radiation and a bone marrow transplant made possible after his younger sister was a donor match. However, the family learned this summer that the leukemia had returned. This week, he and his mom head to Johns Hopkins All Children’s Hospital for a three-and-a-half-month stay for treatment while his father and sister remain home for work and school.

“No child should have cancer, and no family should be worried about medical bills when their child is fighting for their life,” Whyte adds. “The Pickett family had already been through so many highs and lows, and we ask the community to join us in helping ease the burden.”

Adyn Strong will be sold exclusively at Fort Myers Brewing Company’s taproom in Gateway and available for to-go pickup starting Aug. 4 at 2 p.m. The limited-edition craft beer sells for $12 with $10 from every 6-pack sold going directly to benefit the Pickett family as 8-year-old Adyn prepares for his fourth battle with cancer.

The limited-edition label for the Adyn Strong brew, which was inspired by Adyn’s love for LEGOs, was created by Jeromy Boutwell of Boutwell Designs with printing services donated by Blue Label Packaging Company.

Established in 2013, Fort Myers Brewing Company was the first microbrewery to open in Lee County and continues to lead Southwest Florida’s surging craft beer movement. Founded by Rob and Jen Whyte, Fort Myers Brewing carries a signature line of flagship beers in addition to seasonal brews and small batch specialties. Its ales, pilsners, stouts and IPAs are winners of multiple prestigious awards, including golds at the Best Florida Beer Competition, a silver at the 2018 World Beer Cup and a bronze at the 2019 Great American Beer Festival. Fort Myers Brewing was named “Best Large Brewery in Florida” in 2016. Its beers are poured at 1,041 locations, including 620 bars and restaurants, and are available for purchase in 421 retail outlets, including grocery, package and convenience stores. The brewery is located at 12811 Commerce Lakes Drive, Suite 28, in Fort Myers. For more information, visit FMbrew.com or call 239-313-6576.