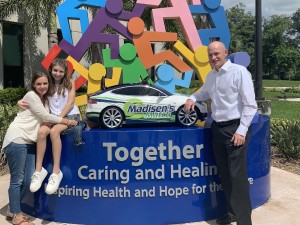 Duane Chaney, financial advisor at Raymond James in Fort Myers, was awarded the Community Service Award at the national 14th Annual Invest in Others Awards. Chaney was honored in a video presentation and watch party Tuesday at Lee Health Foundation for founding Madisen’s Match, a tennis tournament benefitting Barbara’s Friends, the cancer fund for Golisano Children’s Hospital. Madisen’s Match has raised more than $1.3 million for Lee Health and Golisano Children’s Hospital since 2008.

Because Chaney was selected for the award from three finalists, Barbara’s Friends will receive a $45,000 donation from the Invest in Others Charitable Foundation. Chaney presented an additional check Wednesday at Golisano Children’s Hospital for $40,622.56, which he raised this year from donors to Madisen’s Match, despite having to cancel the event due to the pandemic. Chaney also delivered a second “Madisen’s Match Tesla,” a child-size version of the Tesla Model S wrapped in the Madisen’s Match colors and logo purchased using funds from donors to Madisen’s Match. The mini electric vehicle will be used by children staying at the hospital.

“It’s invaluable to have a volunteer like Duane Chaney as part of our extended Lee Health Foundation family,” said Chris Simoneau, chief foundation and development officer for Lee Health. “He is driven and passionate, not only leading Madisen’s Match, but in sharing our mission of excellent health and well-being with the community. His philanthropic leadership is outstanding. Golisano Children’s Hospital has diagnosed 36 children in SWFL with cancer since March, and Duane’s support of Barbara’s Friends enables us to help these children and families as they get care at Golisano.”

The Invest in Others Awards program recognizes the charitable work of financial advisors in communities across the country and around the world. Advisors are nominated for actively giving back to nonprofits to improve their communities and make a difference in the lives of others. Finalists are selected based on their leadership, dedication, contribution, inspiration and impact on a nonprofit and the community it serves. There are five categories of awards: Catalyst, Community Service, Global Impact, Volunteer of the Year and Lifetime Achievement.

“We’ve worked really hard to build Madisen’s Match to what it is today,” Chaney said. “To be able to raise this much money through this award for Lee Health Foundation and kids with cancer, especially with COVID-19, is what it is all about. The recognition is great but it’s more knowing we can make a difference in a really tough year. I’m humbled, honored, and speechless. To be considered with this class of advisors and be chosen as the winner for being a person who values giving back to their community is a real honor.”

In 2008, Chaney’s niece Madisen was diagnosed with an inoperable brain tumor at the age of three. Duane decided to use the energy and emotion from this experience to create a fundraising event benefitting Lee Health Foundation and better equip doctors to fight pediatric cancer. Chaney logs hundreds of hours each year organizing the many facets of the event and enjoys connecting with the children who have been helped by the fundraising efforts of events like Madisen’s Match.

Madisen’s Match is a thriving pro-class tennis tournament featuring some of the best tennis players worldwide. The event has grown over the past 12 years to include a gala, live and silent auctions, tennis clinics with the pros, a kid’s clinic and a full pro-class exhibition hosted in a college arena.

Established in 1995, Barbara’s Friends provides equipment, staffing and services to support lifesaving cancer care for children from across Southwest Florida at Golisano Children’s Hospital. The Pediatric Hematology/Oncology Program is the only program of its kind in Southwest Florida and has served over 10,000 patients since opening. No child is denied treatment or turned away as a result of their family’s inability to pay for care. For more information about the Barbara’s Friends fund and supporting child patients in your community, please call Lee Health Foundation at (239) 343-6950 or visit BarbarasFriends.org.

Established in 1994, Golisano Children’s Hospital of Southwest Florida has been named a “Top Hospital” by The Leapfrog Group for the past three years. It is the only recognized children’s hospital between Tampa and Miami. Lee Health opened the new 134-bed Golisano Children’s Hospital in May 2017, relocating the children’s hospital from the adjacent HealthPark Medical Center. It includes comprehensive pediatric services including a 24-hour pediatric emergency department, hematology-oncology unit, milk lab, Regional Perinatal Intensive Care Center, and Level II and Level III NICU with 70 private rooms. Golisano Children’s Hospital is proud to have been named Soliant’s 2019 Most Beautiful Hospital in the U.S., a recognition determined by popular vote. For more information, visit GolisanoChildrensSWFL.org.

About the Invest in Others Charitable Foundation

The inspiration for the Invest in Others Charitable Foundation came directly from the financial advisors who invest in others by giving back to their communities with overwhelming generosity and dedication. Since its founding in 2006, Invest in Others has amplified these efforts by providing a platform for advisors to increase awareness, visibility, and funding to their favorite nonprofits. For more information, visit investinothers.org or follow Invest in Others on Twitter, LinkedIn, and Facebook.