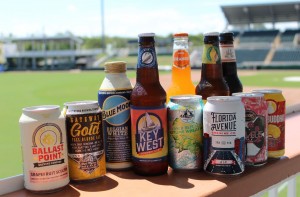 Beer, Baseball & Boom, presented by Killebrew Root Beer, has quickly gained fame as a top midsummer event for beer aficionados, who will have two full hours to taste samples of ice cold ales, lagers, pilsners and stouts from brewing companies near and far. Many Southwest Florida breweries will be featured on the stadium concourse, including Scotty’s Bierwerks, which this season has brewed the new Scotty’s Miracle Blonde Ale.

“For just $6, fans will receive a wristband to attend the beer fest and hopefully find a new favorite brew at the ballpark,” said Chris Peters, Miracle president and general manager. “We suggest arriving early and staying late to take full advantage of Beer, Baseball & Boom.”

The event is an extension of the Miracle’s Ballpark Festival of Beers, a larger beer fest that celebrated its 14th anniversary in January. This season, the Miracle have expanded the variety of beer and alcohol options being served at Hammond Stadium to offer fans a greater selection of Florida-based brews.

Beer, Baseball & Boom runs from 6 to 8 p.m. on Friday, July 20 on the stadium concourse. The Miracle will be playing the Lakeland Flying Tigers, with first pitch set for 7 p.m. Game tickets start at $8.50 in advance or $10 on game day.

Brews to be featured at Beer, Baseball & Boom include:

The July 20 game features an abundance of promotions, including:

For more information about baseball tickets and promotions, please call 239-768-4210 or visit MiracleBaseball.com.

The Fort Myers Miracle are the Class-A Advanced Affiliate of the Minnesota Twins, and have played home games at Hammond Stadium since 1992. Notable Miracle alumni include Joe Mauer, Miguel Sano, Byron Buxton and Torii Hunter. Follow the Miracle online at MiracleBaseball.com or through its social media channels: Twitter (@MiracleBaseball), Instagram (fortmyersmiracle), Facebook (Fort Myers Miracle) and Snapchat (ftmyersmiracle). For questions or ticket information, call the Miracle at 239-768-4210.