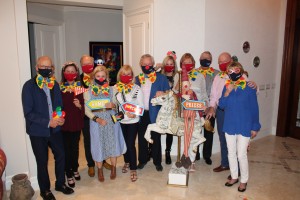 Guadalupe Center’s Circtacular, a circus-themed virtual fundraising extravaganza, raised more than $950,000 to support the nonprofit’s mission of breaking the cycle of poverty through education for the children of Immokalee.

Guadalupe Center’s signature event is the nonprofit’s largest annual fundraiser and traditionally kicks off Naples’ winter season of philanthropic formal galas. In 2021, Circtacular instead was livestreamed to smart TVs, laptops, tablets and smartphones across Southwest Florida and beyond.

“All year, our rallying cry has been ‘The show must go on,’ which refers to both Circtacular and our education programs,” Montecalvo said. “We have remained student focused and mission forward because, in our eyes, nothing can stop education as long as enough people passionately care about it. We are incredibly thankful for the unwavering support of our sponsors and donors who are helping rewrite the stars for students and families in Immokalee.”

Circtacular’s audience of philanthropists, business and community leaders, entrepreneurs and educators received patron party boxes filled with mementos, including a clown bowtie, animal crackers, locally-made custom cookies, popcorn and salsa, and Guadalupe Center accessories such as hats and face masks. The show’s interactive program featured dozens of students who are benefiting from contributions made by generous Guadalupe Center supporters.

During the show, current and former students shared their personal stories through “This Is Me,” a new campaign that introduces the talented, inspiring students of Immokalee to Southwest Florida. One of those students was Marc Dorcin, whose family moved to the U.S. from Haiti after the devastating earthquake in 2010. He spoke no English at the time and was later assigned to remedial classes as a freshman at Immokalee High School. Now, after hard work under the tutelage of his mentors and staff at Guadalupe Center, Dorcin is enrolled in the rigorous Cambridge AICE program at school. Last year, his father passed away, and again Guadalupe Center stepped in to help, making sure he was still on track to graduate and pursue a college degree.

“Adversity is no longer my task-master; it will not control my future,” Dorcin said. “Instead, my future is filled with possibilities, including a college education.”

Circtacular’s primary fundraising mechanism was the Jump Up for Education, a lively interactive drive that allowed attendees to make a donation and “jump up” to show their support for Guadalupe Center. Donations large and small began pouring in, including a $100,000 match challenge from an anonymous donor.

About Guadalupe Center
Guadalupe Center is a purpose-driven, nonprofit organization with proven results in creating endless possibilities for the students of Immokalee through education and fostering personal and academic success that leads to economic independence. With a focus on breaking the cycle of poverty through education, Guadalupe Center is proud of the children’s accomplishments: 95% meet or exceed kindergarten readiness measures, 100% of Tutor Corps high school seniors graduate high school and are accepted into college, and more than 94% graduate with a post-secondary degree.