Jason’s Deli of Southwest Florida, recognizing that families appreciate a financial break while preparing for the new school year, is offering 10 days of complimentary meals for children 12 and under at the restaurant’s six Southwest Florida locations. 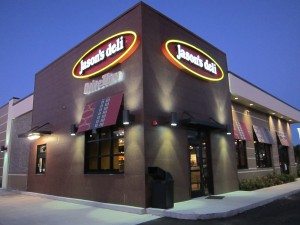 From Aug. 5 through 14, diners will receive up to two complimentary kid’s meals with each adult entree and drink purchase. Children must be present, and the Kids Eat Free special may not be combined with other offers.

According to the National Retail Federation, 76.4 percent of families with school-age children will change their spending because of the economy, the lowest in the seven years of tracking.

“Back to school shopping can really impact a family’s budget,” said Diana Willis,  owner-operator of Jason’s Deli of Southwest Florida.  “With the State of Florida tax-free weekend August 5-7, we are kicking off our eighth year of giving our local families a well-deserved break.”

In 2011, Parents magazine recognized Jason’s Deli as the No. 1 family restaurant chain in the nation, based on an analysis of food content, including calories, fat, saturated fat and sodium. Editors also compared the quality of ingredients (such as offering organic milk or antibiotic–free chicken), and conveniences including call-ahead seating, online ordering, crayons for children and the availability of high chairs and booster seats.

Founded by an Italian family in 1976, the Beaumont, Texas-based restaurant chain has more than 240 locations in 28 states. Jason’s Deli core values are providing the highest quality food, outstanding hospitality, a great place to work and a healthy, growing company with the highest personal standards.

A family-owned deli restaurant chain, Jason’s Deli was founded in Beaumont, Texas, in 1976 by Joe Tortorice Jr. and now has more than 250 locations in 29 states. In 2005, Jason’s Deli was the first major restaurant concept to ban artificial trans fats in the U.S. and later became the first to eliminate high-fructose corn syrup. At Jason’s Deli, regardless if you want gluten-sensitive menu items or vegetarian options, healthy kids’ meals, or if you would like to build your own salad at their famous salad bar, you will be delighted by the bigger choices of better food, from healthy to indulgent. Jason’s Deli locations of Southwest Florida are Fort Myers: 13550 Reflections Parkway at Cypress Lake Drive; Naples: 2700 Immokalee Road; Cape Coral: 2311 Santa Barbara Blvd.; Port Charlotte: 1100 El Jobean Road; and Sarasota: 5231 University Parkway. For information, visit JasonsDeli.com or call 985-7215.