Leadership NEXT goes behind-the-scenes at Dave & Buster’s for Aug. 13 session at Bell Tower

Leadership NEXT goes behind-the-scenes at Dave & Buster’s for Aug. 13 session at Bell Tower 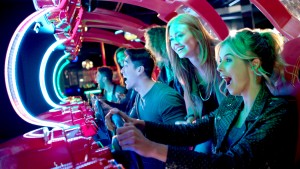 Go behind the lights and action of the new Dave & Buster’s, the area’s popular new entertainment destination at Bell Tower, with an exclusive behind-the-scenes tour.

Each month, the Greater Fort Myers Chamber of Commerce’s Leadership NEXT program offers unique educational and networking opportunities for advancing business professionals in Southwest Florida. The Aug. 13 session will feature a discussion with Dave & Buster’s on the intricacies of launching a national brand, fun insights about the industry, special event and team building packages, as well as other observations.

General Manager Rob Peterson, who was on the opening team for the Fort Myers location, will share his journey with Dave & Buster’s, which started as a bartender in 1992. He worked his way up to become the general manager of the Gwinnett store in 1997. Since then, seven other Dave & Buster’s locations have had the honor of calling Peterson their captain.

Also speaking will be Brigid Purdy, who joined the Dave & Buster’s team in 2016 as the special events sales consultant at the Palisades store in New York. After growing in the role for a little over two years, she was chosen to become the senior corporate sales manager of the new Fort Myers location as part of the opening team.

The Dave & Buster’s team will be joined by Priority Marketing’s Director of Public Relations Holly Boldrin, Director of Client Services Katie Damminger and Media Director Rachel Toomey, who will speak about partnering with Dave & Buster’s to provide valuable market intel to make the VIP grand opening a success.

After Dave & Buster’s announced it was coming to Southwest Florida, the company sought to partner with a local public relations agency to provide valuable market intelligence, execute a public relations and marketing campaign for the grand opening, garner extensive media coverage and generate sustained buzz throughout the area.

With only one month before the grand opening, Priority Marketing was challenged to drive at least 1,000 people to a VIP event, with attendees falling in Dave & Buster’s target audience of 21- to 34-year-olds, as well as attract job applicants and media opportunities.

During the Leadership NEXT program, Priority Marketing will recap the critical elements that made this campaign a resounding success.

Leadership NEXT is a group of advancing professionals who represent a variety of businesses and industries throughout Southwest Florida. Monthly sessions take place from 5 to 7 p.m. on the second Tuesday of every month and offer opportunities to develop new knowledge and skills, establish working relationships with colleagues and engage in valuable programs and discussions to further enhance their careers. The Leadership NEXT annual program is sponsored by the Florida Gulf Coast University Alumni Association.

Leadership NEXT is free to attend for members of the Greater Fort Myers Chamber of Commerce and $10 for future members. Attendees are encouraged to register in advance at FortMyers.org and follow “Leadership NEXT” on Facebook for more information.

About the Greater Fort Myers Chamber of Commerce:
Serving Lee County and surrounding areas since 1989, the Greater Fort Myers Chamber of Commerce, Inc. is a business organization of professionals who support and promote a progressive, sustainable community. The Chamber represents nearly 800 businesses, professionals and individuals throughout Lee County, providing opportunities for members to participate in a variety of meaningful networking, educational and community- and business-focused programs and events. The Greater Fort Myers Chamber of Commerce is located at 2310 Edwards Drive in downtown Fort Myers. For additional information regarding membership opportunities or events please call 239-332-3624 or visit www.fortmyers.org. For the latest news and updates, follow the Chamber on Facebook at www.facebook.com/gfmcc or Twitter at @FtMyersChamber.