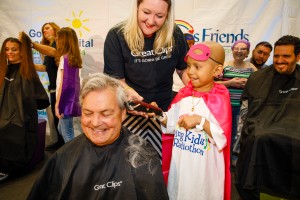 City of Fort Myers Mayor Randy Henderson joined Golisano Children’s Hospital of Southwest Florida Chief Administrative Officer Armando Llechu, and dozens of others including doctors and team members, community leaders and influential individuals from Southwest Florida, to have their heads shaved by pediatric cancer patients on Friday, Sep. 27 during the second annual Clips for Cancer event.

To raise awareness and drive philanthropic support for local children with cancer, these “hero sidekicks” asked the Southwest Florida community to make donations to Barbara’s Friends – Golisano Children’s Hospital Cancer Fund. For more than 20 years, Barbara’s Friends has supported lifesaving cancer care for children across Southwest Florida at Golisano Children’s Hospital. The Pediatric Hematology and Oncology Program is the only program of its kind in Southwest Florida, and no child is denied treatment or turned away as a result of their family’s ability to pay for care.

“What this occasion affords us is the opportunity to embrace our children who are fighting this wretched disease so they can have a normal life,” Mayor Henderson said. “The way we fight this disease is through money and research.”

A theme of heroes and sidekicks highlighted the heroic stories of Golisano Children’s Hospital cancer patients who shaved the heads of volunteer sidekicks. Heroes included Sarai Salinas-Hernandez, who at 5 years old was diagnosed with stage 4 cancer. Sarai needed radiation five days a week for several months and is currently receiving chemotherapy treatments. Through it all, Sarai keeps smiling and lights up a room with her laugh. Another hero, Juan Carlos Frenes-Lopez, was diagnosed with leukemia when he was 3 years old and received chemotherapy treatment for three years. Now 9 and an offensive lineman for his football team, he has long luxurious hair. He cut his ponytail to have it donated in hopes it will help another child with cancer feel better about losing her hair. Hero McKenzie Hummer, who inspired Llechu last year to hold the event, was diagnosed at 8 years old with an aggressive, cancerous brain tumor. Twenty surgeries, 30 radiation treatments, 10 months of chemotherapy and numerous hospital stays and doctor visits followed. Over the last few years, she has battled late-effect complications as a consequence to the treatments she received to save her life. She is a strong young hero that continues to defy the odds every day.

“We were able to raise funds as well as make memories for the children,” Llechu said. “Words cannot express the gratitude for the community, sponsors and volunteers who participated. We are so thankful for the Southwest Florida community, the love they have for Golisano Children’s Hospital and more than anything the love they show for the children and families we care for.”

For more information about helping kids with cancer in Southwest Florida, please call Lee Health Foundation at (239) 343-6950 or make a donation at LeeHealthFoundation.org/ClipsForCancer.

Established in 1994, Golisano Children’s Hospital of Southwest Florida has been named a “Top Hospital” by The Leapfrog Group for the past two years. It is the only recognized children’s hospital between Tampa and Miami. Lee Health opened the new 134-bed Golisano Children’s Hospital in May 2017, relocating the children’s hospital from the adjacent HealthPark Medical Center. It includes comprehensive pediatric services including a 24-hour pediatric emergency department, hematology-oncology unit, milk lab, Regional Perinatal Intensive Care Center, and Level II and Level III NICU with 70 private rooms. Golisano Children’s Hospital is proud to have been named Soliant’s 2018 Most Beautiful Hospital in the U.S., a recognition determined by popular vote. For more information, visit GolisanoChildrensSWFL.org.