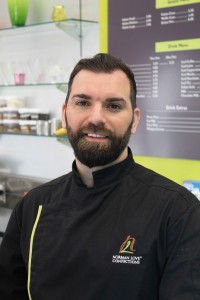 Norman Love Confections has hired seasoned professional French pastry chef Mathias Boirie as Executive Pastry Chef for the company. Boirie brings more than 15 years of experience in the pastry industry, including at Michelin-starred restaurants in France.

After he completed his training in pastry-making in 2004 in France, Boirie worked with Michelin-starred chefs Mathias Dandine and Laurent Tarridec in the south of France. After working in London for a year as a pastry chef, he returned to St. Tropez, working at Senequier, a restaurant on the French Riviera renowned for its pastries. He continued to hone his skills at La Tarte Tropezienne, a Saint-Tropez pastry shop with more than 30 stores known for tropezienne pies, a dessert pastry of filled brioche named by actress Brigitte Bardot, and at Mont Blanc, a restaurant known for its chocolates and pastries.

In 2017, he left France with his wife Lola for the United States, and worked in New York with the French Group, Le District, before joining Norman Love Confections.

“Chef Mathias is an excellent addition to our team, with his passion for beautiful pastry and chocolates,” said Norman Love, founder and owner of Norman Love Confections. “Since I started my career as a pastry chef, I can recognize someone who has passion for enhancing and developing our gourmet pastries to the standards and tradition I established when I started the company nearly 20 years ago.”

Founded in 2001 by Norman and Mary Love, Norman Love Confections creates and distributes handcrafted artisanal chocolates from its corporate headquarters at 11380 Lindbergh Blvd. in Fort Myers, Florida. The award-winning Fort Myers-based chocolatier has been lauded more than a dozen times by a leading consumer ratings magazine, including recognition six times for producing the best ultra-premium chocolates in the nation. Forbes.com included Norman Love Confections BLACK line on its list of the nation’s top 10 truffles; The Huffington Post listed it among the six best U.S. destinations in its Chocolate Lover’s Travel Guide; and USA Today named Love as one of its top 10 entrepreneurs for 2014. Love was named the inaugural inductee of Dessert Professional Magazine’s Chocolatier Hall of Fame, partnered with local chefs to present a six-course meal at the James Beard House in New York and Norman Love Confections was ranked among the top 10 shops in the world for chocolate lovers by U.K. media outlet Daily Telegraph.

Norman Love Confections has Chocolate Salons in Fort Myers, Estero and Naples, including a pastry shop and café at Whole Foods Market in Fort Myers salon. Chocolates, gift baskets, sipping chocolate and Love’s book, “Artistry in Chocolate, A Story of Love,” also can be ordered online at www.normanloveconfections.com. In addition, Norman Love Confections chocolates and desserts are offered on 18 Princess Cruises’ ships through the “Chocolate Journeys” partnership and at independent retail locations throughout the U.S. For more information visit www.normanloveconfections.com or call 239-561-7215.