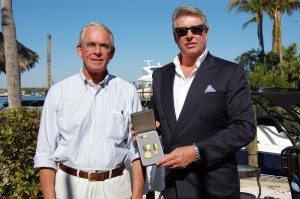 The U.S. Navy honored Lee County’s own Capt. John “Giddy Up” Bunch with the Navy Distinguished Public Service Award for his superior work leading the Operation Open Arms organization. Since 1951, this prestigious medal has only been awarded to 27 recipients including George Halas, Joseph Rosenthal, Tom Hanks, and Steven Spielberg.

The Distinguished Public Service Award is presented to civilians for courageous or heroic acts, as well as outstanding service to the Navy or Marine Corps. Congressman Francis Rooney presented the award on Friday, March 9 on Fort Myers Beach.

“I am honored to have recommended Captain Bunch for this award,” Rooney said. “Service over self is what makes the men and women of our military the greatest in the world, and John’s actions through his charity highlights that service. I thank him for all he has done, and continues to do, for our nation’s soldiers and their families.”