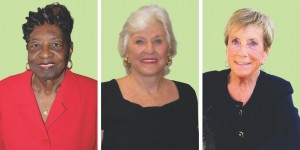 Pace Center for Girls, Lee County has announced its 2020 Grande Dames Tea, which will honor three local women, Marie Ackord, Marilyn Stout and Barbara Watt-Biggs, for their roles in business, community and philanthropy. The three honorees will be recognized at Pace’s annual Grande Dames Tea celebration presented by the Gunterberg Charitable Foundation on Tuesday, March 10.

“This year’s Grande Dames are three phenomenal examples of women that have made great strides within their professions and who set the standard for community service through their years of impact right here in Southwest Florida,” said Meg M. Geltner, executive director at Pace Center for Girls, Lee County. “We look forward to celebrating Marie, Marilyn and Barbara for their wisdom, achievements and incredible life experiences at our 2020 Grande Dames Tea in March.”

Ackord, 81, was born the second of nine children to a sharecropper, living on a farm in Georgia before her family moved to Daytona Beach in 1943. From modest beginnings, she earned a scholarship to attend Bethune-Cookman College and was the first in her family to graduate from college. She moved to Southwest Florida in 1960 and started her 43-year career in education, over the years serving as a mathematics teacher at Carver High School in Naples and Dunbar High, North Fort Myers High and Dunbar Seventh Grade Center in Lee County, followed by a role as human relations specialist with the school district. An active member of the Southwest Florida community, Ackord was instrumental in establishing the Fort Myers Alumnae Chapter of Delta Sigma Theta Sorority. Her leadership has guided the chapter in many achievements, including the foundation of its Deltas Life Development Center, which has provided college preparation services to thousands of local students since 1983. She has also served as a trustee and senior advisor and currently serves as a trustee emeritus of the Southwest Florida Community Foundation, and is a member of Bethune-Cookman University Booster Club. She is a member of Saint John First Missionary Baptist Church where she serves on the board of directors and the Willing Workers Ministry.

Stout, 83, is a council member for the City of Cape Coral. Originally from Michigan, she worked as a secretary at the Selfridge Air Force Base and lived in six states and two foreign countries before moving to Cape Coral in 1982. Stout’s political career began in 1980, passing out literature for Ronald Reagan’s presidential campaign. Over the years, she has fulfilled many leadership roles for political organizations including the Republican Women’s Club of Cape Coral, Fort Myers Republican Women’s Club and the Florida Federation of Republican Women, also serving as a mentor for other local women beginning their careers in the political sector. Stout has a long history of community involvement, including serving 14 years on the board of Lee Health and organizations including Cape Coral Hospital Auxiliary, American Red Cross, Cape Coral Chamber of Commerce and several others. She serves currently in many capacities, including as a deacon at Faith Presbyterian Church and on the board of directors for Cape Coral Kiwanis Club, the Cape Coral Chapter of the Military Officers Association of America and is concluding her run as president of the Uncommon Friends Foundation this year. She and her husband of 50 years, Tony, are together parents of four children and have many grandchildren and great-grandchildren.

Watt-Biggs, 83, is the founder of Century 21 Sunbelt Realty and philanthropist within the Cape Coral community. Watt-Biggs has called Cape Coral home since its population was only 30,000 and raised her children, grandchildren and great-grandchildren in the area. With humble roots, she grew up on a small family farm in Oregon and toiled 20 years in the bar and restaurant industry in Alaska and Key West, with a short stint as a ship cook and deckhand with a fishing crew that sailed the deadly Bering Sea. She changed career paths when she was 47 years old, establishing Century 21 Sunbelt Realty in Cape Coral. Over the course of 36 years, she has grown the Sunbelt franchise from a four-person operation to a 400-person powerhouse covering Lee, Collier and Charlotte counties. Her leadership cultivated the company into the No. 1 Century 21 Real Estate office in the world in 2005, winning numerous awards and recognitions for her success. Watt-Biggs established a nonprofit foundation in her name, and over nine years has given hundreds of thousands to causes such as Easter Seals, no-kill animal shelters, police forces and several health care causes, including American Cancer Society, American Red Cross, Hope Hospice and Lee Health.

Ticket sales begin Feb. 3, with admission at $60 per person and $500 for tables of eight. Proceeds from the event benefit Pace and its strength-based, gender-specific programs that guide Pace girls in finding their voice and achieving their potential.

To learn more about the event and sponsorship opportunities, visit www.pacecenter.org/locations/lee or call 239-425-2366.

Since 2007, Pace Center for Girls, Lee County has been providing girls and young women an opportunity for a better future through education, counseling, training and advocacy. The gender-specific, strength-based program is one of 22 Centers throughout Florida, and is known throughout the nation as a best practices model for diverting girls from the juvenile justice system. Pace is a registered not-for-profit organization that relies on the support of individuals, businesses, civic/community organizations and churches in Lee County in order to serve girls and their families. Since its inception, Pace Center for Girls, Lee County has served more than 650 at-promise girls and young women, believing each one deserves an opportunity to find her voice, achieve her potential and celebrate a life defined by responsibility, dignity, serenity and grace. For more information on Pace Center for Girls, Lee County, call 239-425-2366 or visit www.pacecenter.org/locations/lee.