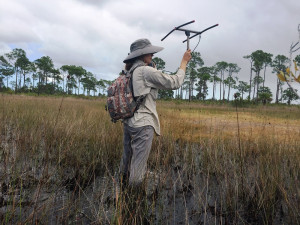 A team of wildlife biologists at the Conservancy of Southwest Florida, in partnership the United States Geological Survey, have published peer-reviewed research on the longest and largest tracking study to date on the invasive Burmese python.

Titled “Spatial ecology of invasive Burmese pythons in southwestern Florida,” the research article is published in the June issue of Ecosphere. The objective of the Conservancy’s five-year study was to better understand the spatial ecology of the python to assist in the design of effective control programs. Determining and quantifying home range estimates and habitat associations can streamline targeted removal efforts for wide-ranging, cryptic animals such as the Burmese python.

“This is a heavy-lifting assignment and we’ve been hot on the trail of these invasive apex predators for the past eight years,” said Ian Bartoszek, the Conservancy’s environmental science project manager and lead  author on the publication. “The Burmese python is not interested in us, but they are decimating our native wildlife. The more we learn about their habitat use and movement patterns, the better we can inform and guide solutions for controlling the python population. We need to stay cool, calm and follow the science on this issue.”

Research findings suggest that searching for adult pythons during the November through April breeding season in elevated habitat with appropriate cover may increase detection probability and removal rates for reproductive pythons. According to the research paper, this investigation is the first to quantify the scope and scale of invasive python movements and habitat use in southwestern Florida.

“Understanding Burmese pythons’ ideal non-native habitat is critical information when it comes to detecting this hard-to-find invasive species,” said USGS research ecologist Kristen Hart. “Our collaborative work extends what we know about their home range and habitat selection and this type of information can be used by natural resource managers to work towards designing python control strategies.”

In addition to the recently published article, the Conservancy has reached a milestone in terms of the amount of python removed. Since launching its Burmese Python Research and Removal Program in 2013, the Conservancy has captured and removed over 20,000 pounds (9,072 kg) of pythons through active searching and scout snake tracking efforts.

The Conservancy’s nationally recognized python research program uses radio transmitters implanted in male “scout” snakes to understand python movements, breeding behaviors and other characteristics. During the breeding season, adult male pythons equipped with transmitters can lead biologists to breeding aggregations that consist of multiple males and a single large female. This technique allows researchers to then find breeding females and remove them from the wild, a targeted approach to reducing the population of pythons by removing females and their developing eggs. Several record-breaking large snakes have been removed through this technique. The largest female python captured through the Conservancy’s program weighed 185 pounds (83.9 kg) and was the heaviest python captured to date in Florida. The largest male python captured on the study weighed 140 pounds (63.5 kg) and is the largest male python documented in the wild.

“At the Conservancy, we follow the science and allow it to guide our mission,” said Rob Moher, president and CEO of the Conservancy. “Our python research is a great example of scientific collaboration with partners at the local, state and federal level to address threats to our native wildlife and uncover strategies to control the population. In addition to our research, the Conservancy is expanding our educational outreach with the opening of the new John & Carol Walter Discovery Wing at the Dalton Discovery Center later this fall. The new wing will feature an Invasive Species Gallery and digital Climate Change Gallery as we seek to better educate our members and guests on the impact of invasive species on our eco-system and quality of life.”