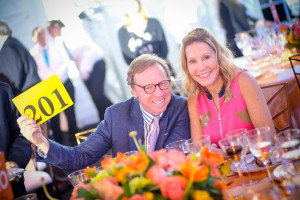 The Conservancy of Southwest Florida announces Terry and Bob Edwards as chairs for the 2022 Magic Under the Mangroves gala set for Thursday, March 3, 2022 at the Conservancy Nature Center in Naples.

Last year, the event was held virtually and raised $1.4 million. It was livestreamed from Keewaydin Island, where the Conservancy first started in 1964 when a new road was planned through the heart of Rookery Bay.

This year, the event will be held under a tent on the grounds of the newly expanded Conservancy Nature Center. The $5 million renovation and expansion of the Susan and William Dalton Discovery Center adds the John & Carol Walter Discovery Wing with new interactive exhibits exploring areas of critical importance to the region.

“Magic Under the Mangroves is an exciting time to celebrate all that we’ve accomplished during the pandemic, while helping to support the work we still need to do,” said Rob Moher, Conservancy president and CEO. “The nature center has been closed since early 2020 due to the pandemic and to allow the expansion, but our work never stopped with the help of our supporters.”

Named one of the top charitable events in Naples, Magic Under the Mangroves supports the Conservancy’s mission to protect the water, land, wildlife and future in Southwest Florida, raising more than $15 million since its inception to support the mission work of protecting water, land, wildlife and our future in the region. The event will include cocktails, hors d’oeuvres, a seated dinner by Windows Catering, an award-winning “green” caterer, and live and silent auctions featuring one-of-a-kind items and experiences.

Co-chair Terry Edwards is a former art gallery director who, with her husband, is a trustee of the Naples Children & Education Foundation and former chair of the Naples Winter Wine Festival. She chaired the 2017 and 2018 Naples Zoo galas, has served on the Conservancy’s Magic Under the Mangroves committee and was elected to the Conservancy’s board in 2020. Her husband and co-chair, Bob Edwards, is founder and CEO of Edwards Asset Management. A resident of Naples for more than 40 years, he serves on the board of the Baker Museum, Artis–Naples, and the Guggenheim Museum in Venice. The couple has earned numerous awards for their support of various charities.

“As a board member for the Conservancy, I know all the work the organization is doing and needs to do in support of our mission,” Terry Edwards said. “As a result, I know just how important this fundraiser is to the future of our community.”

For information on tickets and sponsorships, visit conservancy.org.

The Conservancy of Southwest Florida is a not-for-profit environmental protection organization with a 57-year history focused on the issues impacting the water, land wildlife and future of Collier, Lee, Charlotte, Hendry and Glades counties. The Conservancy accomplishes this mission through the combined efforts of its experts in the areas of environmental science, policy, education and wildlife rehabilitation. The Conservancy of Southwest Florida, world-class Nature Center and von Arx Wildlife Hospital are headquartered in Naples, Florida, 1495 Smith Preserve Way, south of the Naples Zoo off Goodlette-Frank Road. Learn more about the Conservancy’s work and how to support the quality of life in Southwest Florida www.conservancy.org.