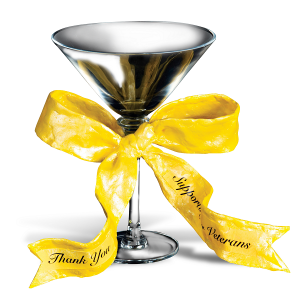 “We believe commitment to the local community is vital,” said Joseph Matina, managing director of UBS Private Wealth Management-The Matina Group. “We have partnered with an organization that mentors veterans transitioning from military careers to the civilian workforce, so support of the Celebrity Martini Glass Auction was a natural fit as we continue to serve our long-time Naples clients and the community with our new Naples office.”

The sold-out dinner marks a farewell to the annual event where martini glasses signed by celebrities or American heroes and designed by noted artists were sold at a live auction. CMGA founder, Brenda Melton, developed the concept that linked celebrities, artists, and the generous Naples community in a one-of-a-kind event.

“The Finale Salute to the CMGA would not be possible without the sponsorship from UBS-The Matina Group,” said event founder Brenda Melton. “They understand that freedom is not free, and we must support our local veterans and their families who have sacrificed so much for our nation.”

The Veterans Support Fund was established in 2018 by the Celebrity Martini Glass Auction in partnership with the Collier Community Foundation to distribute funds to local charities meeting the physical, emotional, and psychological and social needs of veterans.

Through the years, support of the event has benefitted local veterans’ organizations, including Gulf Coast Veterans & Friends, Home Base Veteran & Family Care, Naples Take a Soldier Fishing and Wounded Warriors of Collier County.

The Celebrity Martini Glass Auction was started in 2008 when Brenda Melton asked friends to design a martini glass as a toast to “Sex and the City’s Cosmopolitan cocktail. Inspired by her friends’ creativity, she later asked the films’ stars to sign glasses for a Sex and the City 2 debut party. Those glasses were auctioned by the Naples International Film Festival, raising $15,000. The event became a must-have invitation, and grew to raise nearly $5 million for charities, primarily for veterans. For information and to donate, visit naplescmga.com.