What ‘other duties as assigned’ means at Priority Marketing

What ‘other duties as assigned’ means at Priority Marketing

Priority Marketing is a full-service marketing agency that employs more than 40+ full-time professionals. It is the largest firm in Southwest Florida with a history dating back to 1992.

A headline on our homepage, in bold font, proclaims We Do It All…

How do we define “all?” All, as in everything.

The vague phrase tacked onto every job description – “other duties as assigned” – certainly is apropos at Priority Marketing. Team members regularly step outside of their job descriptions, gladly, to meet the needs of our clients.

“We asked our team to share their ‘other duties as assigned’ stories, and in many cases, it was the first time we heard them,” said Teri Hansen, APR, president and creative director at Priority Marketing. “That’s because our team does whatever it takes to help our clients shine. Going above and beyond is the norm.”

Below are some “other duties as assigned” stories: 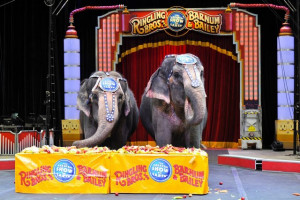 Story: “One of Priority Marketing’s public relations services is event promotion. Our team has generated publicity for fundraising galas, grand openings, trade shows, athletic events and ice–skating shows. When “The Greatest Show on Earth” – Ringling Bros. and Barnum & Bailey circus – came to town, our role was to generate buzz in the community. One PR strategy was inviting media partners for backstage tours, interviews and meet-and-greets. Another strategy was introducing community groups to the circus. We wanted to create an exclusive behind-the-scenes experience for about 50 Cub Scouts and their families – brunch. And not just any brunch, either... an elephant brunch for two! In addition to arranging the scouts’ visit, I also had to plan the brunch menu for Ringling Bros. After a little research, I made the produce run of the year, buying up all the apples and lettuce I could fit in my “trunk.”  After all, elephants eat up to 300 pounds of food each day! My produce haul filled two folding tables, one for each elephant. I carefully arranged the “fruit salad” into a colorful spread, which the elephants promptly devoured to the delight of the scouts. Two trunks up!” 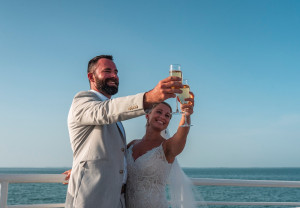 Story: “Two years ago, I married the man of my dreams at a beautiful beach wedding in Key Largo. Everything was perfect – the ceremony, the weather, the décor, the photos. We were enveloped in love from our family and friends. It was everything a bride could have hoped for, and then some. Yet, a month later, I found myself back in my wedding gown and my husband, Nick, back in his suit. We had a second wedding of sorts. One of our clients, Captiva Cruises, was shooting a new promotional video highlighting its boats, tours and destinations. A line in the script explained that the Lady Chadwick is available for “daytime cruises and private charters, including special events such as weddings, rehearsal dinners, parties and corporate events.” We needed to round up extras for the photo and video shoot, and since my wedding dress still fit (albeit a little tighter!), I played the role of a newly married bride. My colleagues from Priority Marketing also headed out to sea as wedding party guests. Ultimately, four shots from the “wedding” made the final cut. Nick and I now have two sets of wedding photos to celebrate our marriage and Captiva Cruises has an award-winning promotional video and spectacular photos that give future guests a glimpse at the amazing experience they provide.” 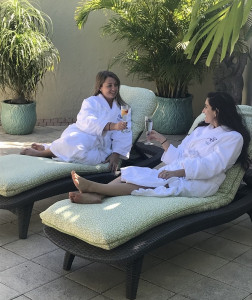 Story: “Shangri-La Springs Resort & Spa is a fantastic destination, so it’s no surprise Southern Living magazine wanted to spotlight the beautiful property. Myself and three colleagues provided on-site coordination as a reporter and photographer made their way to the spa, organic garden and historic grounds. I helped arrange an incredibly colorful display table of freshly picked fruits, vegetables and flowers for a portrait of Organic Garden Manager Cecilia Morales. I love helping our clients look good on camera. Little did I know that I’d soon be in front of the camera! The Spa at Shangri-La Springs offers organic serenity as guests rest, relax and rejuvenate during their treatments. A pair of empty pool chairs, however, would not illustrate the property’s ambiance or beauty. So Client Services Director Katie Damminger and myself kicked off our shoes, put on a white robe, grabbed Champagne glasses and plopped down in the private garden. The magazine must have loved the shot of our toast. The photo and caption occupy one-fourth of a page in the March 2021 issue of Southern Living – on newsstands today!” 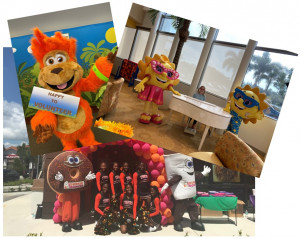 Story: “I joined the Priority Marketing team in 2017 and have enjoyed wearing many hats within our agency – including copywriter, media buyer, social media coordinator and marketing coordinator. I prefer to work behind the scenes on behalf of our clients, rather than striving to be the center of attention (although you may find me singing my heart out on stage as part of the Fort Myers Mastersingers or on the worship team at Riverside Church). On occasion, clients need a high-energy, charismatic person to serve as mascots at media events, grand openings and product launches. In a turn of events, and perhaps because I was new at the time, I was asked to become Sprinkles, the loveable chocolate sprinkle doughnut mascot for Dunkin’. It’s a non-speaking role, so it’s like being an actor in a silent movie. The key is assuming the character’s personality. As mascot, I got to interact with happy Dunkin’ customers, children in the hospital and even with Azul, the mascot at FGCU. I must have done a good job, because a year later, I became Cuppy, Dunkin’s iced coffee mascot. Three other members of our team, Katie Damminger, Olivia Orth and Sarah Nadal, also have served as mascots for Charity for Change (Giver) and Golisano Children’s Hospital (Sunny and Sparkle). Like they say, you always have to watch out for the quiet ones!” 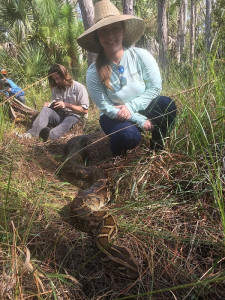 Story: “Our PR team coordinates hundreds of media interviews each year. Many are just quick phone calls or video chats, but others involve putting on a pair of boots, hiking into the Florida Everglades and wrangling snakes. The Conservancy of Southwest Florida is a national authority on Burmese python research, so we were happy to coordinate interviews with an Associated Press reporter and videographer. A Zoom session certainly wouldn’t suffice for this story. We headed deep into the Big Cypress National Preserve, where the Conservancy tracks pythons using radio-telemetry. It essentially was a walking interview as we hiked deeper and deeper into the woods. Finally, we encountered our first python. It was a big one. They’re all big ones! The AP got a great interview and footage, but my job wasn’t done. As the researchers bagged the live snakes, I had to carry their excrement back to our vehicle. Pythons are called the apex predator in the Everglades, so their waste provides valuable insight about what they are eating. Once we arrived back at the Conservancy’s lab, we measured the snake – length, weight, girth and other observations. I certainly never thought I’d be posing for photos next to a LIVE python twice my size, but you just never know!” 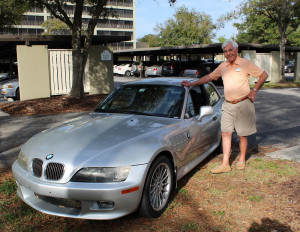 Story: “We always find great resident stories at Gulf Coast Village. This one involved Jim Baker, a 93-year-old resident and former race car driver. He had joined the iRacing circuit, competing in virtual races with a high-tech racing simulator in his dining room. Jim had given up real-life racing, but still owns his silver 2000 BMW Z3 Coupe. Following our interview, we went outside for a portrait of Jim and his beloved Bimmer. However, Jim rarely drives the vehicle. It had been parked under a tree for weeks, and unfortunately, was covered in bird droppings. The photo would be, as they say, the ‘money shot.’ We never want to distribute a less-than-perfect image to magazines and newspapers. So I grabbed a towel and a bottle of water, and begin polishing the hood and windshield. Within a few minutes, the car was shiny and spotless, and we got our ‘money shot!’ Six months later, I found myself cleaning another client’s car. This time, we needed photos of a vehicle wrap created by our talented graphic designers. While the client was in a meeting, I was outside polishing his SUV. We never told him, but I’m sure he wondered why his windows were spotless after the meeting!”

Do you need a marketing firm that goes above and beyond for its clients? Call Priority Marketing today at 239-267-2638 or send an email to info@PriorityMarketing.com.